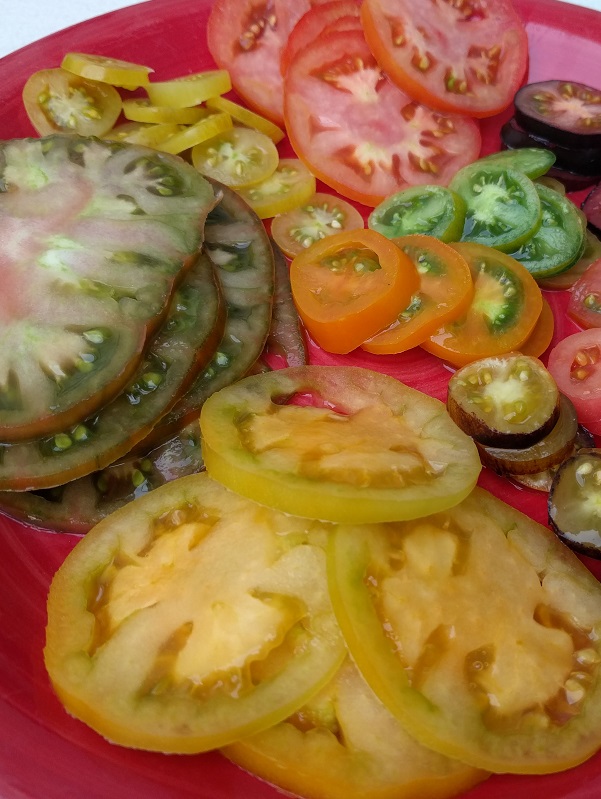 The story of the shapes and sizes of tomatoes There’s beefsteak tomatoes, and then there’s a tomato cultivar called Beefsteak, which is, unsurprisingly a beefsteak type. So when a customer asks me for a beefsteak tomato, and I say “Sure, which one?”, I fully understand …

Indeterminate vs Determinate Tomatoes come in two growth habit types – determinate, or bush varieties, and indeterminate or vining varieties. DICTIONARY: Growth habit of a plant in horticulture refers to the shape, height, form, and general appearance of a plant species. Basically answering the question … 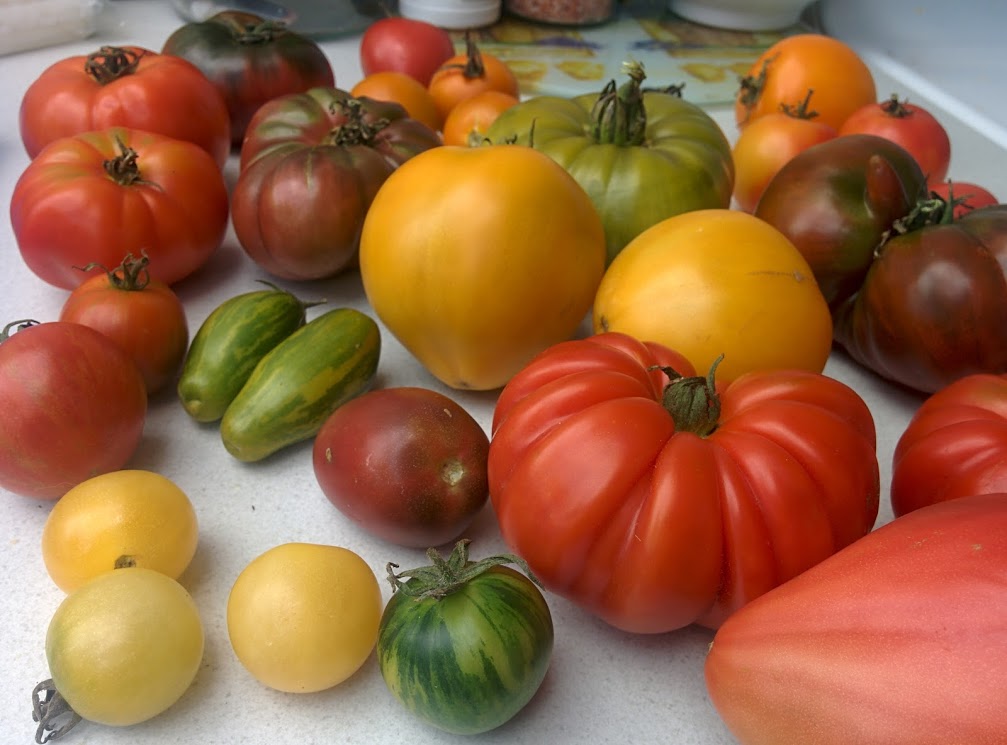 Welcome to the first in a series of All Things Tomato

Have you browsed your seed catalogs and seen little tags next to plant names saying “F1 Hybrid” or “Open Pollinated”? Have you been told by farmer’s market salesmen about their tomatoes only being “heirlooms”?

So what is the deal with Heirlooms (sometimes called Heritage), Open Pollinated, Hybrid, and  F1 Hybrid? *

Simply put, an heirloom tomato is a tomato cultivar whose seeds have been passed down from generation to generation for at least the last 50 to 100 years, and the seeds come true to type in an open pollinated environment.

Tomato connoisseurs love heirlooms, mostly because of their taste. They definitely aren’t (always) the best looking – there are some beauties out there, but generally they don’t produce greatly uniform fruit (supermarket standard), and come in all sorts of strange colours, shapes, and sizes. And they don’t last long. But they really have great taste. Much, much, much better than most standard store-bought red tomatoes (in my opinion).

DICTIONARY: When tomato seeds are said to “come true to type”, it simply means that if you grow a plant from the seed, it will be guaranteed to produce the same shape/colour/size/taste tomato as the parent plant.

What then are Hybrids? Well, hybrids are normally commercially bred, with human interference, by specifically crossing two plants with particular traits to result in a better tomato. So if plant A gives really bright, red fruit that looks good, but tastes a bit bland, it may be crossed with plant B which lacks a good look or good productivity, but produce a better tasting fruit. Once a match is found, a hybrid is created. It must be kind of fun, playing around with hybrids! Some hybrids are created to let us have plants with better disease resistance, or that grow in specific conditions, such as cold areas, or for their particular growing habit traits, such as dwarf cultivars, and even to get plants with an increase in productivity, cross-country shipping etc.

Sometimes hybrids are developed that provide stable offspring, which means, in an open pollinated environment (no human interference, so simply what would happen in nature), they will produce true to type too. So once you have created such a hybrid, it will produce similar offspring each time, you don’t have to recross the original parent plants.

This is pretty much how a lot of heirlooms started, I reckon. Someone played around with cross-pollinating their plants, found the resulting fruit was amazing, and that the seed was stabilized, and year-after-year, it still produces true to the original type, and is now an heirloom.

Example of Open Pollinated tomatoes (that are not yet classified as heiroom): Indigo Rose

F1 hybrids are another thing altogether. Their seed won’t stabilize and come true to type. This means, you’ll always have to cross the two original parents to create the seeds that will result in that particular hybrid. F1 stands for First Generation. So plant A + plant B results in seeds that will grow up to become plant C, but plant C’s seeds will not produce plant C again. They may revert back to either A, or B, or something completely different, but very probably never another C.

Example of F1 hybrids are: Rapunzel

What’s in the shops

Well, that depends, because some savvy shops now provide the discerning customer with a choice, but the stock-standard red globe tomato you find in most supermarkets are most probably hybrids that were chosen for how many tomatoes a plant can produce, in a short time, early in the season, and how uniform they are in size, shape and colour, and very importantly, how well they keep (shelf life). Taste is pretty much last on the list of importance for mass produced tomatoes (own opinion) It’s there… no one will eat a totally disgusting tomato after all. But bland is bland.

The sheer difference in tastes that are available in heirlooms is just astounding – from complex flavours that are deep and dusky in some of the purple tomatoes to uplifting citrus-like flavour in many of the yellow ones.

My list of five favourite heirlooms for taste include:

*Note that this interpretation is my own, though based on handed-down knowledge, and research. There is much debate around what really constitutes and heirloom, some faculties needing it to be more than 100 years in the growing.

More on growing tomatoes in the next installments…

Hello! I'm Minette, a herb fanatic who loves to grow and use food and medicine plants. I would love for you to join me through my gardening adventure becoming more self-sufficient in my urban back yard. I'll share some soulful gardening ideas as well as recipes for food and health.

Searching is in progress

My images, as well as the content and recipes linked to them, are my only humble bit of personal income, feel free to share far and wide, but please do so with proper attribution and link-backs to my original posts.