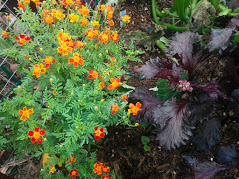 When you picture a vegetable garden in your minds’ eye, I am sure that somewhere there’ll be a bright and proud row of marigolds, or perhaps a nasturtium trailing through… and if I would ask whether you plant basil with your tomatoes, most people would nod enthusiastically.

Is there reason behind these common planting schemes other than the beauty of having a few flowers and herbs dotted about your growing vegetables? Is the idea that some plants hinder or help each other all a bit hocus-pocus, or does companion planting have a valid space in the growing agenda?

What is Companion Planting

DICTIONARY: Companion planting is a system by which certain plants are grouped together in the garden, or not planted in close proximity, according to the purported effects they have on each other. People have planted certain crops with their companions for thousands of years—the mosquito fern alongside rice paddies one example, and the 3-sisters method by which the native Americans grew squash, beans and corn together long before European settlement, another.

Companion planting gained momentum in the 1970’s as part of the organic growing movement, and today is commonly practiced as a part of permaculture methodology.

The phenomenon where different plants thrive more when planted close together, can be attributed to one (or more) of the three “P”s of companion planting: Pest Control, Pollination and Productivity.

Possibly the best known, and most widely practiced companion planting is done toward eliminating insect pest problems. The scent of flowers, or leaves, of certain plants act as natural deterrents for insect pests, e.g. Rosemary (Rosmarinus officinalis) and Wormwood (Artemisia absinthium). Plants used in this way may either smell bad enough (to insects) to discourage them from landing, or it could be that they smell strong enough to mask the food crop’s scent to the pests.

It is not only above-ground pests that are controlled by companions, the root secretions of some plants are said to keep pests at bay, e.g. Marigolds (Tagetes spp). Planting companions which pests prefer over the original host crop also helps control pest damage in the garden. Nasturtiums
(Tropaeolum majus) is an effective sacrificial crop or trap crop as it attracts pests away from the main crop, e.g. aphids from roses, and caterpillars from cabbages. Oftentimes the ladybug-lookalike juvenile stink bugs can be found en masse in flower heads of calendula (Calendula officinalis), making it easy to pick the whole flower head and discard the insects before they grow up to wreak havoc on your crops.

While some companions deter the bad insects, or attract them away from your main crop, another set of companions can be
chosen because they are a perfect habitat for beneficial insects, particularly those that prey on insect pests. The flowers of yarrow (Achilliea millefolium) and lacy tansy (Phacelia tanacetifolia) attract hoverflies for example, while dill (Anethum graveolens) and fennel (Foeniculum vulgare) are good for lacewings, and ladybugs find golden Marguerites (Anthemis tinctoria) and tansy (Tanacetum vulgare) irresistible. Planting ornamental plants between your herbs and vegetables (or vegetables in your aesthetic garden) has become quite fashionable. And for good reason too – all the pretty and perfumed flowers attract pollinators! These days there’s a lot of media attention about planting for bees, and the list of plants that attract pollinators such as birds, bees, bumblebees, butterflies, moths, and even beneficial wasps to our gardens, is very long – a few examples of which are borage (Borago officinalis), bee balm (Monarda didyma), calendula (Calendula officinalis), alyssum (Lobularia maritima), thyme (Thymus vulgaris) and lavender (Lavandula spp).

Planting guilds for fruit trees, as proposed by permaculture principles, always make lots of space for these pollinator attracting plants. Intercropping companionable plants allows gardeners to use space most effectively without compromising on crop quality. Planting radishes and lettuces in close proximity, for example, or lettuces in the shade of a cucumber trellis, are good examples of using plants beneficially alongside each other to maximize use of space. A classical example of this is the 3-sisters method of growing beans, squash and corn together. Many square foot garden plans and food forest gardening takes intensive intercropping into consideration.

Productivity is also naturally increased by the other two p’s of companion planting – preventing pests and providing pollination – resulting in happier plants and abundant produce. There is another set of plants I would like to include in the companion tables, a group I’m going to call imProvers as they can be used to improve the plants and soil in your garden. Comfrey (Symphytum officinale) is a good companion to bring up mineral nutrients from deep down as their tap roots can extend more than 3m! The leaves are great in the compost pile, or to make a foliar feed for the garden. Yarrow leaves (Achilliea millefolium) activates compost and is said to speed decomposition too. Chamomile (Chamaemelum nobile and Matricaria recutita) are physician plants – said to revive any ailing plant grown in its proximity, while Foxglove (Digitalis purpurea) is noted for its growth-stimulating effect on nearby plants.

From planting to plate Some garden friendships carry through to the table – not only do tomatoes and basil grow well together, but they pair beautifully in food too. Another that works well in the garden and the pot, is beans and savory, and if you have lavender growing around your peach or nectarine trees – try a few lavender blossoms in your next fruit dessert, they go magically.

Does it really work

Companion planting has many skeptics, and while some claims have been scientifically proven to be at least somewhat true, planting companions together is by no means a miracle cure, or the complete answer to all your gardening problems. A garden should always be considered as a whole, and companion planting should be considered as another tool with which the gardener can work toward the end result they desire.

I personally have always gardened according to companion planting principles, and have had really good results in my garden. I firmly believe that the combinations that I have trialed have led to crop plants that grow optimally.

Don’t be put off by the long lists and complicated charts on companion planting that are rife through the internet. Start small, and basic, and expand as you gain confidence. And don’t be afraid to try new things, or test “given” companion plant combinations – you may just be rewarded with an extraordinary crop, or if not, at least have gained the hands-on knowledge.

Here follows a list of things I have planted together to great success before:

Tomatoes with a selection of basil (Ocimum basilicum), in particular sweet basil, mini bush basil, lime, Thai (liquorice) and cinnamon basil. Quintessentially I always have Marigolds (Tagetes spp) dotted around my tomatoes, as well as chives (Allium schoenoprassum), lettuce (Lactuca sativa) and chamomile (Matricaria recutita). I have had self-seeded Heartsease viola (Viola tricolor) coming up under and through my tomatoes and lettuces last year, and they looked so delightful, that I’m going to continue with that, at the very least it forms an edible flower living mulch.